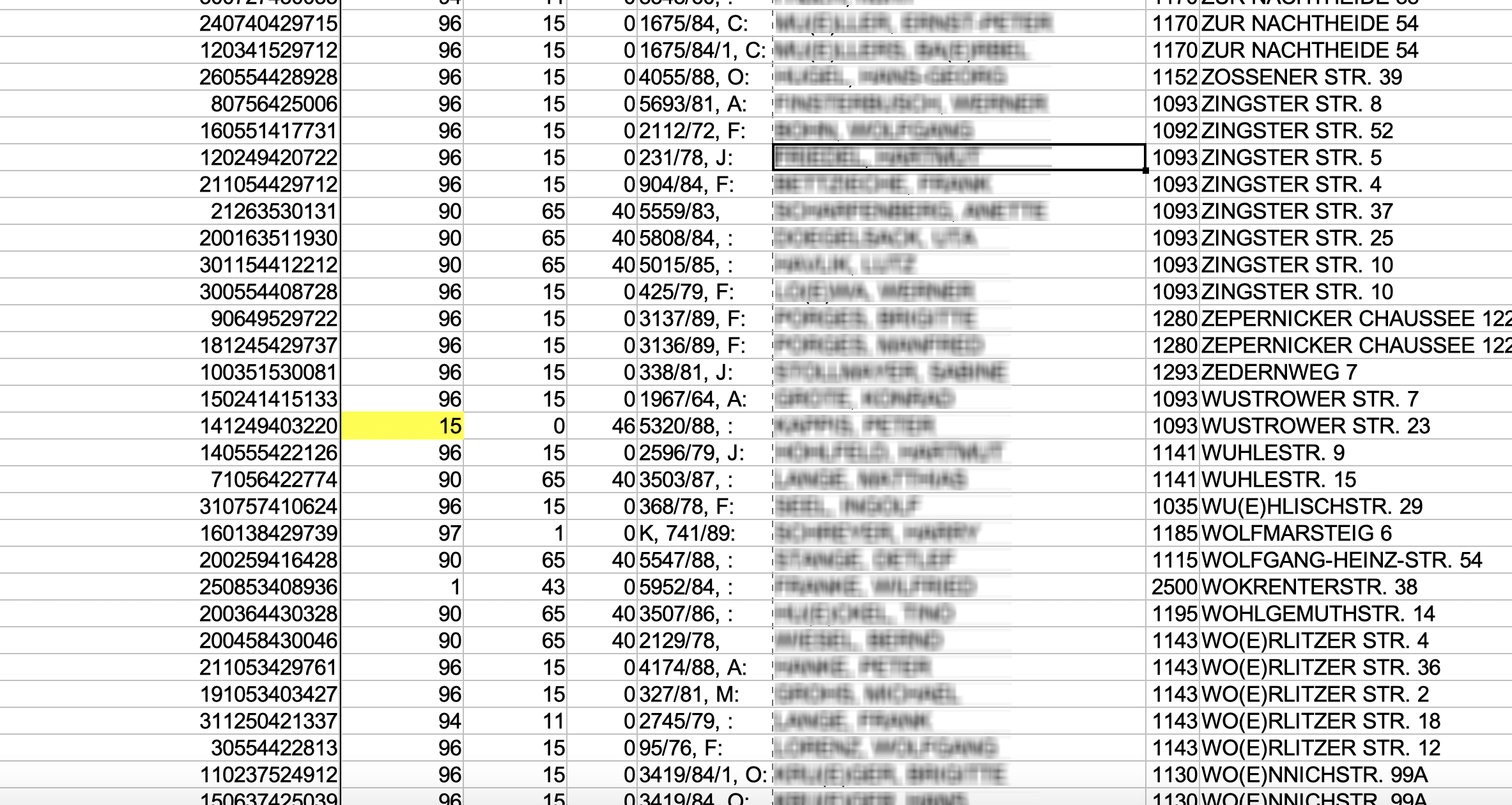 This is a map I put together that looks at how resources (specifically staff and their salaries) were distributed across the 15 GDR Bezirksverwaltungen (District Administrations).

The underlying data for this is the ma-stasi.txt “hamster file:” 99, 630 rows of ID numbers, district and division codes, names, salaries, and often addresses of people who worked for the infamous Ministerium für Staatssicherheit (Stasi) when the end came in 1989. It was dumped to the Internet a long time ago, and since then it has shifted around between servers as people (presumably people represented in it) threaten legal action. The people who keep it available tend to have links to WikiLeaks stuff on their sites, too. It’s that kind of document.

As a result, there are a whole slew of issues with it. For starters, it’s incomplete. Many of the “name” fields were frustratingly empty (including, it should be noted, a record that is pretty clearly that of Stasi Chief Erich Mielke himself). Other people appear to have earned a salary of 0, which seems unlikely, even in the workers’ and farmers’ state. Some records were missing (including the records of a few of the District Leaders shown on the map), while a group of people working in the central state offices were included twice.

I have cleaned up the data where I could, eliminating duplicates, and adding back in the names of the Bezirksleiter I knew of (although, obviously, I couldn’t account for their salaries, and could only work out incomplete versions of their ID numbers). Still, there are also issues of…well…provenance? Text files on the internet are pretty easy to modify, whether to remove a name or add one. There is also an amazing rabbit-hole of conspiracy theories floating about, including one about the fact that the 17th days of March-August have no employees represented. As it happens, all three of the Bezirksleiter who were missing from the spreadsheet had birthdates on the 17th, so that may point to a batch deletion of rows.

Because of all these issues, I decided early on that I wouldn’t include names or addresses in my analysis, except in the case of people whose activities could be verified elsewhere – in this case, the Bezirksleiter, all of whom are discussed on the BStU website. I realize that there are resulting inaccuracies in the salary data as well, but suspect the margin of error is far smaller when looking at the sheer number of employees at each office, and that they are most likely distributed pretty evenly across the districts. Not all these people were agents, but they were all part of the machinery needed for the level of surveillance the Stasi desired.

A few things I noted that didn’t make it onto the map: I was surprised at how often work for the MfS seems to have been the family business. There were many cases of multiple employees, sharing a last name, all at the same address. In some cases, they were likely spouses; in others, based upon birthdates, it appears that children followed in a parent’s footsteps. Another thing that stood out was the range of wages earned. The most common salary was 9,510.00 Ostmark. In today’s USD, that would come to approximately $2560 (with thanks to Prof. Marcuse’s website at UCSB). Many earned significantly less than that, between 2-3000 OM. Meanwhile, Erich Mielke made 79,062.50 OM – more than eight times as much as the average. Granted, it’s nothing like the inequality we see under capitalism, but it still seems…a contradiction, to use a very state-socialist term.